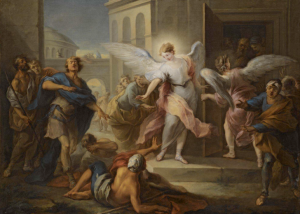 One of the most common arguments (though often fired off as an accusation) that Christians hear against the notion of a good and loving God is that such a God, were he truly good and loving, would not send good and loving people to a realm of eternal punishment. How could such a kind and gracious God possibly damn someone to hell? Doesn’t he love everyone?

And so the line of interrogation goes, scores of skeptics placing God in the dock, wagging their finger at such a ferociously tyrannical deity who demands our affection or else. I mean, who does God think He is anyway? Sure, Stalin ought to be doomed to hell, but not Stephanie. God should certainly punish Hitler, but not Henry.

While much has been said on the subject – books upon books from each side, debates and Facebook tirades ad infinitum – a particular series of events in Genesis provides a helpful center for the compass. In Genesis 12-17 God reveals Himself to Abraham and calls him, famously, to become the father of many generations. Father Abraham had many sons, and many sons had Father Abraham…

In Genesis 18, the LORD appears to Abraham (likely one of many Christophanies) accompanied by two angels and declares His intentions to destroy the wicked city of Sodom. What follows is the remarkable discourse in which Abraham bargains with the LORD to spare the city for the sake of 50 righteous people, then 45, 40, 30, 20, and finally 10. Notice, however, Abraham’s original complaint:

Though Abraham’s trust in the LORD and his intimate relationship with Him has been established (Gen. 15:6, 18:22-23), he still takes it upon himself in interceding for Sodom to question God’s intentions. How could God “sweep away the righteous with the wicked”? How could He allow the “righteous [to] fare as the wicked”? In essence, how could God’s punishment for the bad include the good? How could a loving God allow damnation to come to the innocent? Shall not the Judge do what is just? Shall not the loving God (I John 4:8) do what is loving?

Yet, God’s response to Abraham is revealing. He yields. He accepts Abraham’s plea to spare 50 righteous from the city, and the story does not stop there. Abraham progressively whittles the number from 50 down to 10, hoping to maintain God’s good favor in sparing the righteous. And God continues to accept. What is the point?

God’s lesson for Abraham – and for us – is the same as His lesson throughout Scripture:

The problem with Abraham’s petition for the LORD to spare the righteous is not in the sincerity of his prayer, or in his trusting in the LORD to do what is right, but strictly in his definition of a righteous man. Apart from God, there is no such thing as a righteous person to be spared. While God’s agreement with Abraham to save the righteous is certain – He will save a remnant from the corrupt city – it will not be because they are righteous. They will become righteous because God has saved them.

We see this played out in the following chapter. In Genesis 19 God’s angels enter Sodom to save Lot and his family from the destruction that is sure to come:

“As morning dawned, the angels urged Lot, saying, ‘Up! Take your wife and your two daughters who are here, lest you be swept away in the punishment of the city.’ But he lingered. So the men seized him and his wife and his two daughters by the hand, the LORD being merciful to him, and they brought him out and set him outside the city.” (Gen. 19:15-16, ESV, emphasis added)

This is the cornerstone of God’s work in salvation. It is not God’s offering to save good people so that they may become great people, nor is it God’s accepting of our good merits and our noble desires to be saved. God resurrects the dead (Eph. 2). God causes light to shine out of darkness (II Cor. 4). God shows His love  for us in that while we were yet sinners, wholeheartedly obsessed with our sinfulness and in utter rebellion toward God, Christ died for us (Rom. 5:8).

God did not save Lot because he desired to be saved. Like all of us before we are saved by grace, Lot lingered in the city. He longed to remain in wickedness, not to escape it. He desired Sodom, even above the pressing urgency of angels. Lot’s salvation, and the salvation of his house, came not by his drawing near to God but by the seizing grip of God’s mercy. God came down to save us; He did not accept us as we climbed to Him. All of the initiative is on God’s side. He must seize us, for without it, we will forever linger.

This story is not one of an arbitrary, capricious God, smiting away with the Louisville slugger of holiness, but one of judgment and mercy, dual characteristics of the Almighty God. Abraham was right: the Judge of all the earth shall do what is just. Sin and rebellion shall be punished. Yet, Abraham also saw the merciful Father, extending a gracious hand to save Lot and his family when they had done nothing to deserve or desire it:

“So it was that, when God destroyed the cities of the valley, God remembered Abraham and sent Lot out of the midst of the overthrow when he overthrew the cities in which Lot had lived.” (Gen. 19:29, ESV, emphasis added)

God justly destroyed the wickedness of Sodom. God mercifully spared a remnant, not for their righteousness but for His own. God remembered Abraham’s intercessory prayer and set Lot apart from the city of doom.

The question is not how a good and loving God can punish good people; there are none apart from His grace. The question is how a righteous and holy God could save the Lots who linger.

May we rejoice and be glad, filled with the truth that He “has delivered us from the domain of darkness and transferred us to the kingdom of his beloved Son, in whom we have redemption, the forgiveness of sins” (Col. 1:13-14).

My name is Matthew Huff, and I am passionate about poetry, literature, theology, music, and many other forms of artistic effort. I am a high school English teacher, a poet, and a coffee enthusiast. My aim for Eden.Babel is to explore how our stories, art, history, and culture can be viewed in light of the glory of God in Christ, a pursuit that anticipates the restoration of all things to a new and glorious Eden.

The Cardboard Box of Vinyls…